“The elephants will come back someday.” Gramps chewed on a stick as he stared at the far horizon. The terraformers were hard at work replacing the reddish-purple lumps of native vegetation with the gray-green of earthly sagebrush and bunchgrass.

Momma wiped her hands on her apron and shook her head over his nonsense. She speared me with a look. “You stay out here and keep an eye on Gramps. I’ve got jam on the stove.”

I kicked up a fuss, just for appearances. I liked Gramps, and sitting with him meant I didn’t have to do the other chores around  our homestead, like mucking out stalls, or helping Momma in the kitchen, or even rounding up the ornery beasts we called cows. I’d rather sit on the porch next to Gramps and listen to his stories of the old days, when he left Earth to come to this planet.

The terraformers kicked up long plumes of dust as they diligently worked to change the world to a second Earth. They’d finished the land, atmosphere, and oceans. We were on the fringe of where the native plants grew. Within a century, the scientists said terraformers would finally finish wiping out the bulbous growths, replacing them with Earth forests and plains. Terran animals roamed the fields. I watched a pair of bunnies fight it out over a patch of clover the other side of our front fence.

But no one had brought elephants to our world.

“I saw one once, when I was about your age,” Gramps said. The rocking chair creaked. “Back on Earth. The circus came to town. They paraded an elephant down the street. Poor thing looked tired. It looked right at me. Spoke to me in my head.”

I plucked a stem of grass and chewed it slowly while Gramps rambled. He was actually my mom’s great-grandpa, one of the first settlers to our world. He’d had to wear breathers outside, before the atmosphere scrubbers had finished working. He was older than dirt. Everyone told me he was half crazy, but I didn’t believe it. I was eight and he meant the world to me.

“I saw them when they landed here, the elephants.” He pointed off at the dust rising into the air. “Out there it was. They came floating down with their balloons tied around their middles, landed right out there. Said they’d come back some day.”

“Elephants, Gramps? Ain’t no elephants on this world. Never will be.”

He swatted my head. “You watch your tongue, child. I saw them float over those hills, drift down to land light as a feather. Their balloons were pink and white and bobbed above them while they spoke into my head. They were elephants, just like that circus one in the parade.”

We both stared at the horizon for a while, him in his thoughts and me wondering about elephants.

I saw something glint way off in the distance, something up the sky. Dark with pink above against the blue. I squinted to see it better.

“Didn’t I tell you, child? They’ve come back.” Gramps cracked a smile. “The elephants are coming back. Help me up, there. Give me a hand.”

I glanced at the screen door to our kitchen. Momma was singing as she stirred her jam. I couldn’t let Gramps wander off, but she hadn’t said I had to keep him on the porch. How far could he go with his cane and gimpy legs? I gave him my hand, helped pull him to his feet.

He started down the path to the gate. I trotted at his side. He didn’t pause at the edge of the meadow, just kept right on going towards the elephants drifting out of the sky with balloons floating above.

I counted seven elephants before I had to hurry after Gramps. He moved fast for someone well over a hundred years old.

He stopped at the bank of the stream, shading his eyes as he looked up.

I hurried to his side and took his hand.

He squeezed my fingers. “The elephants came back, like they promised. Help me cross the stream, now. I’m not as spry as I used to be. Back in the day, I would have jumped this little trickle. No sweat.”

I stared up at the beasts. They were huge, lumpy things, dark gray all over with a single light patch on their belly. They had noses that looked like stretched out hoses, waving and gesturing like a boneless arm attached to their faces. Their ears flapped like wings, guiding them our way. A string rose from their back to the base of a round balloon, striped pink and white. It didn’t look big enough to carry their weight, but what did I know? I was only an eight-year-old farm girl.

Gramps splashed across the stream, his hand on my shoulder to keep his balance. I didn’t mind the cold water on my bare feet or the breeze that tossed my short hair around my face as the elephants landed out on the hill beyond the stream.

Their feet touched lightly. The balloons dropped to float just over the broad backs of the beasts, the strings hanging slack. The nose tentacles waved and gestured, constantly moving back and forth, up and down.

Gramps clamped his hand tight on my shoulder, pulled me around to face him. “Go back home, young Carla. This is not for you. Not yet. They’ve come for me. Maybe someday, when you’re old and done with life, they’ll come for you. But not yet. Now, get on home. Go on, scoot.” He pushed me away, back towards home.

I only took a few steps before I turned to watch him limp up the hill towards the elephants and their balloons. He stopped in front of the biggest, bowed, then reached out a hand. The elephant wrapped its nose around his hand, slid it up his arm, touched his cheek, then gently lifted him high into the air. Gramps was smiling as the elephant settled him on its wide back. The balloons rose, tugging the elephants into the air. Gramps waved as they turned to float back the way they’d come.

I searched for those elephants most of my life, combing the shrinking native areas, but never found any trace. Now it’s my turn to sit in the rocking chair and whisper stories to the young ones who’ll listen.

It’s my turn to wait for the elephants to come, floating down gently from the sky with their pink and white balloons.

I saw elephants once, long ago, when I was young.

This story previously appeared in Zetetic: A Record of Unusual Things

Jaleta Clegg loves daydreaming and making pickles. She turns her daydreams into stories and eats the pickles. Most of her stories are science fiction, fantasy, and silly horror; sometimes all at once. Her pickles are usually sweet. She lives in Washington state with a diminishing horde of children, two geriatric dogs, an obese Maine coon, and a very patient husband.

See more of her work at www.jaletac.com. 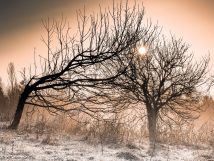